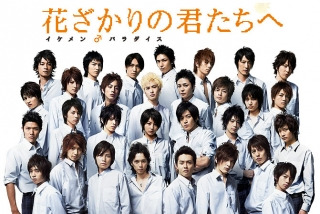 The drama is based on the popular manga of the same name by Nakajo Hisaya, which has already been dramatized in Taiwan. Horikita plays the protagonist Ashiya Mizuki, a Japanese girl in the U.S. who one day sees the young athlete Sano Izumi (Oguri) compete in the high jump on television. She begins to idolize him, and decides to move to Japan to attend the same school as him. However, Izumi goes to an all-boys school, so Mizuki disguises herself as a boy to achieve her dream of being with her idol.

Based on the manga called Hana-Kimi or Hanazakari no Kimitachi e, this show is the Japanese drama adaptation.

Special
special
12
We'll Protect You
1
11
I'll Jump for You
1
10
Depend on Me
1
9
Exposed!
8
I Like Mizuki
7
Suddenly in Bed
6
The Beginning of Stormy Love
5
Hopeless Coast Story
4
Dangerous Three-Person Room
2
3
Bizarre Big Brother
1
2
Wrong Kiss
1
Getting Into the Forbidden Boys' Dormitory
Ads