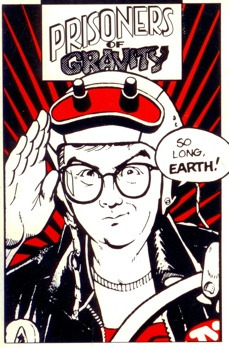 As established through a comic-strip montage opening sequence drawn by Ty Templeton, the premise held that a fan of speculative fiction becomes disturbed by news broadcasts describing the alarming state of the world and decides he must escape. He broadcasts his show each week from an orbiting space station. The show's presentation was fully wrapped in its quirky premise, featuring on-screen graphics and background sounds to simulate a space station atmosphere, "using active, innovative cinematography to ease the visual boredom that often accompanies interviews with talking head(s)."[1] The week's topic was introduced with a few opening thoughts before launching into various interview clips. In each episode, Rick would interview a number of authors and artists, along with filmmakers, animators, and the occasional futurist.