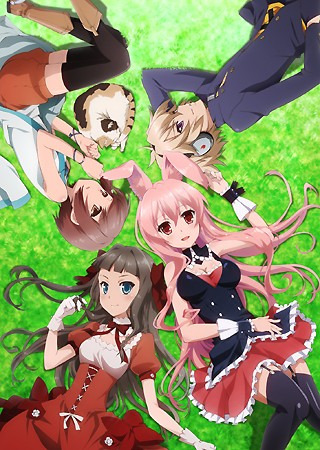 The story follows Sakamaki Izayoi, a boy bored with the entire world. One day, an envelope arrives for him. The moment Izayoi opens the envelope, he is transported to an alternate world. There, he discovers that two other problem children were transported by envelopes as well — a taciturn girl named Kasukabe You with a cat, and a beautiful yet haughty girl named Kudou Asuka. A girl named Kuro Usagi (Black Rabbit) summoned the three to the community No Name to overthrow the devil.

11
OVA
6
special
10
It Seems That the Problem Children Prove Who's on Top?
9
It Seems That the Smell of Death That Brings About Disaster is Growing Throughout the Town?
8
It Seems That a Great Disaster Will Come With the Playing of a Flute
7
Did You Hear that Asuka Will Be Smooch-Smooched in The Dark
6
Looks Like the Problem Children are Participating in a Festival?
5
The Oath Seems To Be Beyond The Stars?
1
4
It Seems Some Pervert Is After Black Rabbit?
3
Sounds Like We're Doing All Sorts of Stuff in the Bath Together?
2
Seems Like a Crazy Loli Clad in Japanese Clothing?
1
Problem Children Are Coming from Another World, Aren't They?
Ads