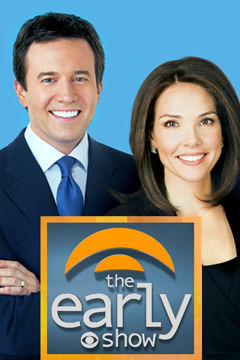 The Early Show is an American morning television program that aired on CBS from November 1, 1999 to January 7, 2012, and the ninth attempt at a morning news-talk program by the network since 1954. The program aired Monday through Friday from 7:00 to 9:00 a.m. (live in the Eastern Time Zone, and on tape delay in all other time zones), although a number of affiliates either pre-empted or tape-delayed the Saturday edition. The program originally broadcast from the General Motors Building in New York City. The Early Show, like many of its predecessors, traditionally placed third in the ratings, behind NBC's Today and ABC's Good Morning America. Much like Today and its fellow NBC program The Tonight Show, the Early Show title was analogous to that of CBS's late-night talk show, the Late Show.

On November 15, 2011, CBS announced the cancellation of The Early Show, and replacement by a new morning program that CBS News chairman Jeff Fager and president David Rhodes stated would "redefine the morning television landscape." The Early Show ended its twelve-year run on January 6, 2012, replaced three days later on January 9 by CBS This Morning.