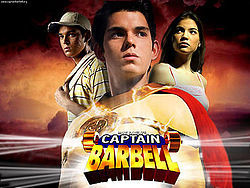 Captain Barbell is a superhero drama television series based on a character of the same name created by Mars Ravelo. It was aired on Philippine television by GMA Network during weeknights on its primetime block. The series premiered on May 29, 2006, and last aired on January 12, 2007. It also aired worldwide, with a three-week delay on GMA Pinoy TV. Richard Gutierrez plays the superhero, Captain Barbell and his alter ego, Teng. His archnemesis Viel Villian, is played by Richard Gomez.