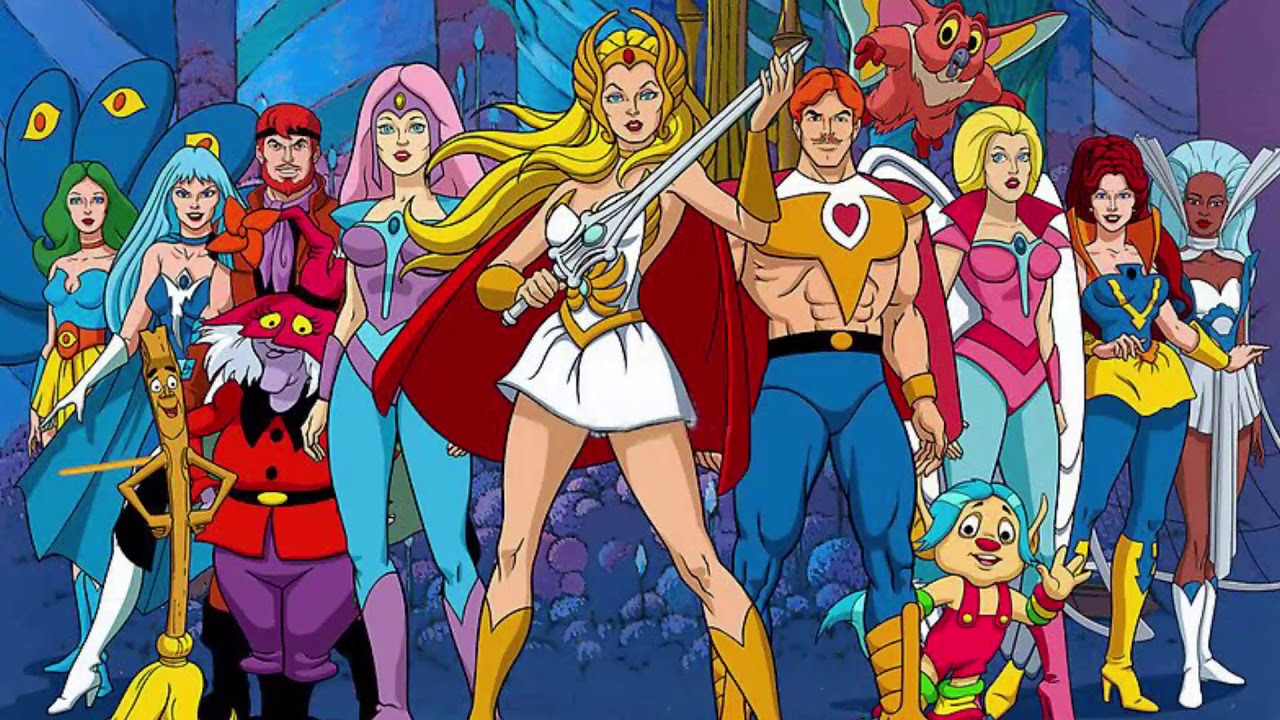 She-Ra: Princess of Power is an American animated television series produced in 1985 by Filmation. A spin-off of Filmation's He-Man and the Masters of the Universe series, She-Ra was aimed primarily at a young female audience to counterbalance He-Man's popularity with young males. Unlike the He-Man cartoon, which was based on the Masters of the Universe toy line by Mattel, the creation of She-Ra was a collaboration between Filmation and Mattel. The initial group of characters and premise were created by Filmation, while the characters introduced later were designed by Mattel. Mattel provided financial backing for the show, as well as an accompanying toyline. The series premiered in 1985 and was cancelled in 1986, after 2 seasons and 93 episodes.

On March 22, 1985, Filmation released an animated movie based on the series titled, He-Man and She-Ra: The Secret of the Sword. The film is composed of five episodes from the She-Ra television series: "Into Etheria", "Beast Island", "She-Ra Unchained", "Reunions" and "Battle For Bright Moon".

28
Swifty's Baby
27
The Bibbet Story
26
Shades of Orko
25
Hordak's Power Play
24
The Inspector
23
Glimmer Come Home
22
Bow's Magical Gift
21
She-Ra Makes a Promise
20
The Locket
19
Just the Way You Are
18
When Whispering Woods Last Bloomed
17
Brigis
16
The Time Transformer
15
Loo-Kee's Sweety
14
Assault on the Hive
13
Portrait of Doom
12
Sweet Bee's Home
11
The Perils of Peekablue
10
Romeo and Glimmer
9
The Caregiver
8
Day of the Flowers
7
Above It All
6
The Pearl
4
A Lesson in Love
3
Out of the Cocoon
2
Return of the General
1
One to Count On
5
Something Old, Something New

65
The Greatest Magic
He-Man and She-Ra: A Christmas Special
special
16
Duel at Devlan
64
Wild Child
63
Flowers for Hordak
62
Magicats
61
Darksmoke and Fire
60
Anchors Aloft (2)
59
Anchors Aloft (1)
1
58
Black Snow
57
Jungle Fever
56
Of Shadows and Skulls
55
Loo-Kee Lends a Hand
54
The Light of the Crystal
53
Unexpected Ally
52
The Wizard
51
My Friend, My Enemy
50
Just Like Me
49
For Want of a Horse
48
Birds of a Feather
47
The Price of Power
46
Micah of Bright Moon
45
Huntara
1
44
The Rock People
43
Welcome Back, Kowl
42
Enemy with My Face
41
Glimmer's Story
40
Treasures of the First Ones
39
Into the Dark Dimension
38
Zoo Story
37
The Anxious Apprentice
36
The Unicorn King
35
Gateway to Trouble
34
Troll's Dream
33
A Talent for Trouble
32
Friends Are Where You Find Them
31
The Reluctant Wizard
30
Play It Again, Bow
29
The Price of Freedom
28
Bow's Farewell
27
The Eldritch Mist
26
Book Burning
25
Small Problems
24
The Mines of Mondor
23
The Crown of Knowledge
22
The Crystal Castle
21
The Stone in the Sword
20
Three Courageous Hearts
19
Enchanted Castle
18
Horde Prime Takes a Holiday
17
A Loss for Words
15
Return of the Sea Hawk
14
He Ain't Heavy
13
Friendship
12
King Miro's Journey
11
The Laughing Dragon
10
The Peril of Whispering Woods
9
The Prisoners of Beast Island
8
The Missing Ax
7
The Red Knight
6
The Sea Hawk
5
Battle for Bright Moon
4
Reunions
1
3
She-Ra Unchained
2
Beast Island
1
Into Etheria
Ads