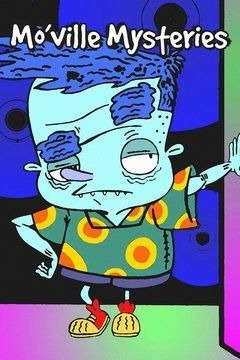 Moville Mysteries is a Canadian animated TV series starring Frankie Muniz as Mosley Moville. The series revolves around Mosley "Mo" Moville, a high school student in Ouija Falls, where the supernatural and strange happen almost everyday. Mo loves the supernatural, and loves getting involved with solving the mysteries. Joining him are his friends Mimi and Hitch. Occasionally they are joined by local conspiracy theorist BB. Occasionally the three don't have anything to do with the plot of the story, and instead Mo acts as the narrator.

26
Scarin' O' the Green
24
Gnome Sweet Gnome
25
Goo on You
23
A Hitch in Time
22
Just My Luck
20
Don't Touch That Dial
21
So You Sold Your Soul for ... What?
18
The Pet Shop of No Return
19
Something Fishy in Lake Gimmie Gimmie Itchy Owie
17
Mirror, Mirror Off the Wall
16
Big Toe, Big Evil
15
Follow That Mo
14
The Night and Day of the Hunter
13
How Now Meowing Cow?
12
Crushed by an Angel
11
The Creep Next Door
10
The Novelty Kid
9
Ghouuuuulllll!
8
Curse of the Mommies
7
The Good Old Days
6
Swarm Enough for Ya?
5
Moville Witch Project
4
How Green Was My Lunch Meat?
3
The Day Rico Became Smart
2
The Tell Tale Recliner
1
Raiders of the Lost Jock
Ads