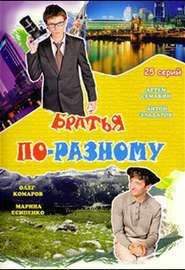 The tie is simple: one fine day, as usual, absolutely unexpectedly, to Andrey there comes his very distant relative (according to the most conservative estimates, the second cousin) Ivan and directly from a threshold declares that he intends to live at the beloved brother. He isn't a speculator, and simply very cheerful and absolutely naive young man. In mountains Ivan worked as the shepherd in collective farm for himself. But, escaping from the marriage imposed by the father, I decided to run where far away. And it appeared in Moscow. Here the self-confident and purposeful mountaineer decides that came it is time to open all the abilities. Brothers start living in one apartment and together work in antique shop. All this also makes a basis for a sitcom – a difference of city and natural perception of life, specifics of national mentality, household sharpness of Ivan and Andrey's not skill. Together heroes get out of humorously difficult situations which, often, and generated. The role of the negative character at the very beginning of development of history in series is played by "the Moscow jerk" Arkady Mikhaylovich – the director of shop where Andrey and Ivan work. Recognition of situations, sympathy to position of the gawk provincial in the megalopolis, charm of the main characters, natural humour of Ivan, Andrey's irony will make these series interesting to a wide range of the audience.