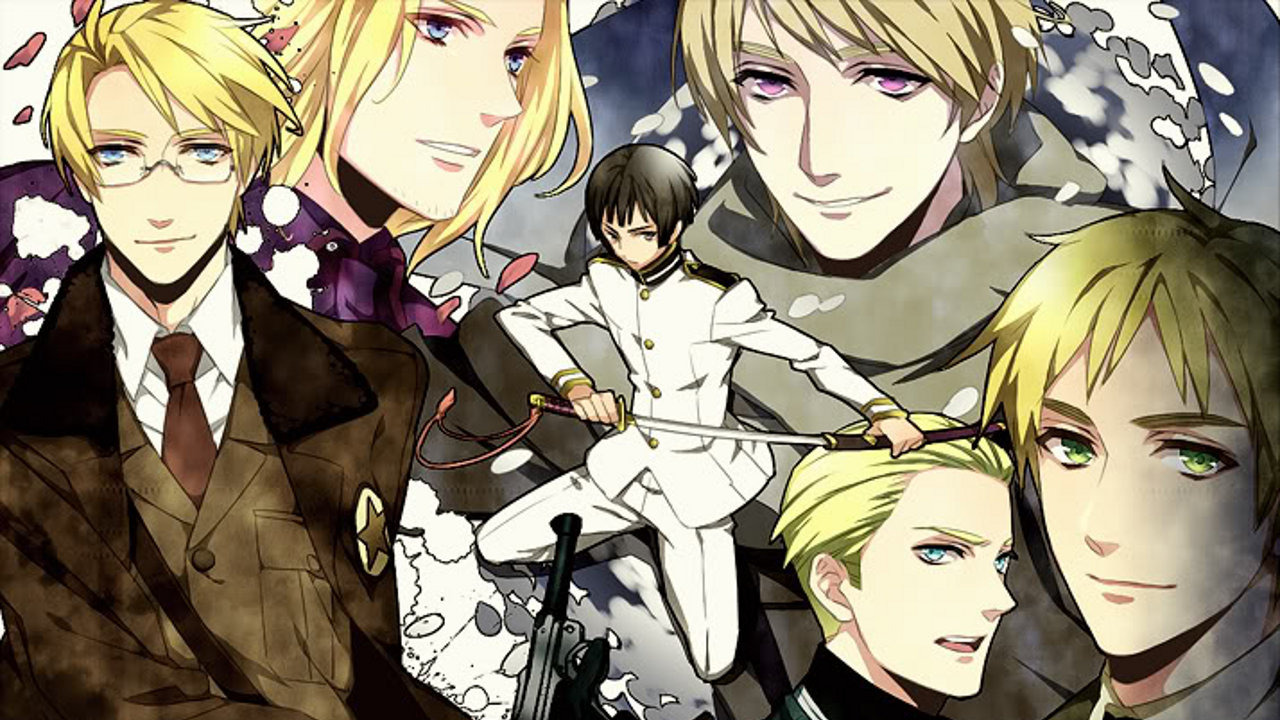 Forget everything you learned in history class, and imagine all the nations of the world as cute guys hanging out on a wildly inappropriate reality show. Now, toss in every stereotype ever and prepare to pledge allegiance to your favorite superpower in Hetalia!

Maybe you'll surrender to Italy's charms. He's a sweetie who's always got a noodle in his mouth and he's BFF with blue-eyed Germany and shy Japan. Sounds nice, right? Of course, their friendship sort of causes World War II, but is that really such a big deal? Not if it means those adorable allies France, America, and England will be stormin' the beach! No matter who comes out on top, victory is yours! Now ditch your textbooks and try to keep up, because history happens fast in Hetalia!

Based on a popular web-released manga series by Hidekazu Himaruya, this has been described as a "cynical gag" story set in Europe in the years between WW1 and WW2 (1918-1939), using exaggerated caricatures of the different nationalities as portrayed by a gaggle of bishōnen. For example, the Italia Veneziano character is into pasta and women. The Deutsche (German) bishi loves potatoes and sausages, and Nippon is an otaku boy. Installments of the manga have jumped back and forth in setting from the ancient times to modern-day geopolitics. The manga's title comes from the Japanese words for "useless" (hetare) and Italy (Italia).

15
In those days, Chibi-chan was...
14
Canada and His Neighbors
13
Together with Russia
12
Liberté, égalité, fraternité and...
11
Davie
10
It's a Pandora Box of Countries! - Second Part
9
It's a Pandora Box of Countries! - First Part
8
Nordics à la Carte
7
African War Front! Part 2
6
African War Front! Part 1
5
The Life of the Great Man, the Awesome Me
4
The Nordic Five +α
3
Meeting of the Nordic
2
Let's Eat Military Rations!
1
Nekotalia Once Again

25
I Was Overwhelmed by Heroines
24
Liechtenstein and the Hedgehog country
23
The Centennial Gift
22
Buon San Valentino (Part Two)
21
Buon San Valentino (Part One)
20
It's the First Anniversary! The Tripartite Pact
19
Keep on moving!! March Forward, Sealand!
18
Hetalia of the Dead (Part Two)
17
Hetalia of the Dead (Part One)
16
What Italy Forgot
15
A bientôt! Until We Meet Again!
14
Brother, we are...!!
13
Finding Santa
12
Merry Halloween!
1
11
Our Failure
10
Turkey&!
9
At Netherlands
8
The Gentle Fight Between Russia and I
7
Things that Often Happen When Rooming with an American
6
Romano's Diary
5
Though I May Depart, You Shall Remain
4
Russia and Friends
1
3
Gakuen Hetalia: Go Forth! Newspaper Club!! (Part Two)
2
Gakuen Hetalia: Go Forth! Newspaper Club!! (Part One)
1
Each Battlefield

24
Kick-Off of the Battlefield
23
Black Ships Have Come (continued)
22
Black Ships Have Come
21
United States of Hetalia 2
20
Episode 96
19
The First Time Poland Rule Was Used!
18
Boss Spain and Chibi Romano: The Battle of Garigliano
17
Fashion (History) Repeats Itself
16
Eastern Europe While Totally Being Pushed Around By Poland
15
The Awesome Frantic Me
14
Prussia and Hungary
13
The Yoke of the Tartars
12
Japan's Emotions
11
United States of Hetalia
10
Can't Escape from Italy (Conclusion)
9
Escape from Italy
8
Can't Escape from Italy
7
China's (A Little Too Early) Start of the Age of Exploration
6
Let's Think About the G8 Members!
5
Court and Aristocracy
4
Chinese-style Mini Revolution
3
A Slight Feeling of Responsibility
2
Salted Salmon, Germany, and I
1
Boss and the Big Boss (2)

24
Boss and the Big Boss (1)
23
The Annexation of Austria
22
The Anglo-Japanese Alliance has been formed
21
Anglo-Japanese Alliance
20
The Moon, the Unsocial Guy, the Old Man, and Italy
19
How Everyone Spent Their Christmas
18
And Then Came Poland
17
Lazy Japan's Anger
16
Spain and His Henchman's Depression
15
An Ally Country's Lunchbox
14
Roswell Incident
13
Reinforcement from Hungary
12
Maria Theresa and the War of Austrian Succession
11
Chinese Copy
10
Switzerland and the Banks
9
Spain the Boss and Chibi Romano
8
Italy Observation Diary
7
Big Brother France and the Frying Pan
6
America's
5
Warsaw Letter
4
The Plot to Conquer Poland
3
Greece and Japan's All-Too Slow-Paced World
2
Greece and Japan's Relationship
1
Diary of The Awesome Me: Volume 128