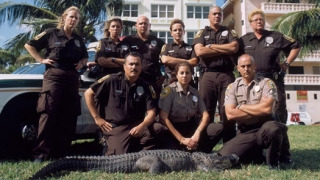 The county of Miami-Dade, Fla., covers more than 2,000 square miles, ranging from South Beach to the Everglades. It is filled with millions of creatures — alligators, Chihuahuas, you name it — but there is only one team dedicated to animal emergencies: the men and women of Animal Cops: Miami.

For the team at the Miami-Dade Animal Services Department, their city is literally an urban jungle. Join the team as they deal with nearly 2,500 calls a month: a loose alligator causes a 9-mile backup on the freeway, a python is found in a public restroom, and a cult that sacrifices animals is discovered. These cases, along with many forms of animal abuse, are explored in Animal Cops: Miami.

Animal Cops: Miami follows a team of officers dedicated to the Animal Services Department as they police the 2.2 million people of the extremely diverse Miami-Dade County area. Based minutes from downtown Miami and on call 24 hours a day, Animal Services responds to a broad range of animal situations, from the most dangerous and serious cases to more light-hearted ones.