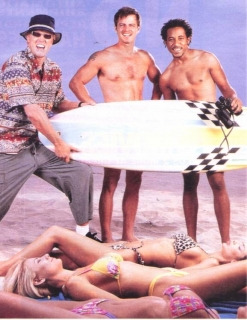 Shasta McNasty focused on three friends - Scott, Dennis and Randy - who are part of the rap rock band Shasta McNasty. After signing to Da Funk Records, the three friends relocate from Chicago to LA where they find out that the label has gone bust. Keeping their advance money that they'd been given, they rent an apartment in Venice Beach where they share a kitchen with their next door neighbor Diana. The first half of the series focused on the band, their landlord, odd jobbing to make rent and generally getting up to mischief, while the second half of the season focused on them working at the local bar for their friend Vern, hoping to get signed by a label again and the developing relationship between Scott and Diana.