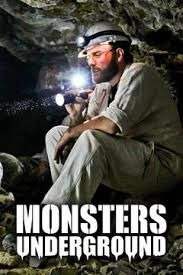 In Monsters Underground, a military survivalist, a trained biologist, a reclusive hunter-tracker, and a hulking pro fighter are on the case to investigate deadly monsters living in the most inaccessible environments on earth: underground caves, caverns, and mines. There, they seek out legendary creatures that thrive in the cold, damp darkness beneath our feet. For thousands of years, myth and folklore have warned of beasts that prowl the underworld. Now, Bill Brock and his team dare to trespass on their realm for the sake of discovering the truth, putting their lives on the line to venture deep under the earth's surface where natural elements can be as dangerous as the monsters themselves.