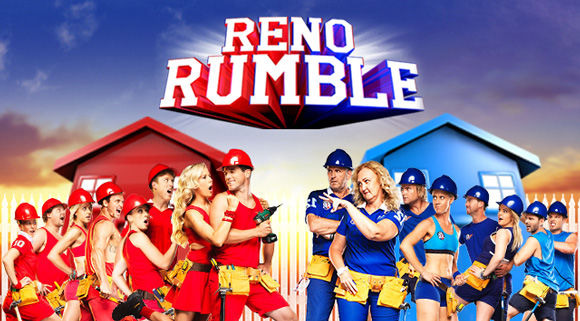 Contestants renovate two suburban houses, with one team eliminated each week. The winner will receive a $100,000 cheque with half going to the winning couple's favourite charity. Each home will be judged by interior design experts who have been briefed by the home owners on the style they want for their renovation. The runner up will receive $50,000 with half going to charity

Each week, each home will be blind judged (unaware of which team renovated which one – or the rooms assigned to each individual couple) and the team with the lowest score that week will be eliminated from the competition.

Reno Rumble: East v West is the second season of Australian reality television series Reno Rumble, it will air on the Nine Network. Unlike the first season which pit former contestants from The Block against former contestants from House Rules, this season will have state based rookie teams from either The East or West Side of Australia competing against each other. It will be hosted by Scott Cam and Shelley Craft and will be judged by Colin McAllister and Justin Ryan. It will premiere Monday 21 March 2016. The winning couple will receive $100,000.