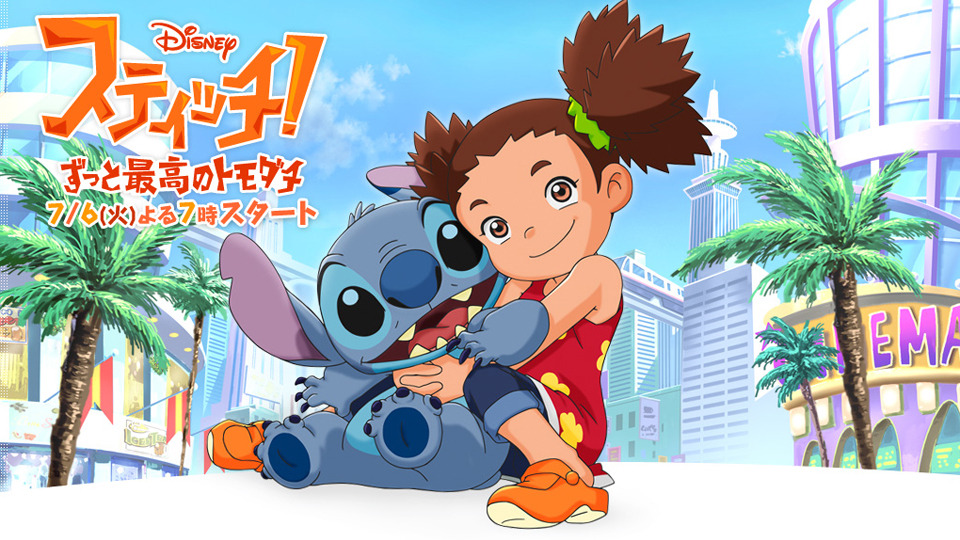 Stitch! is the anime adaptation of the animated feature film Lilo & Stitch and the subsequent successor for the Lilo & Stitch series by Walt Disney Animation Studios. It takes place after the film and debuted in Japan on October 2008. The show features a Japanese girl named Yuna in place of Lilo, and is set on a fictional island in the Ryukyus off the shore of Okinawa instead of Hawaii. The island is called Izayoi. A second anime season, called Stitch! ~The Mischievous Alien's Great Adventure! began airing in Japan on October 13, 2009. A third yet different series from the first two season anime, entitled Stitch! ~Best Friends Forever~ aired on TV Asahi on July 6.

Brother of the Universe
special
29
Goodbye, Stitch
28
Izayoi Island Rescue!
27
Stitch, the Battery Will Be!?
26
Stitch, Going to Tokyo Disneyland!
25
Stitch vs. Another Stitch
24
Even Betrayed Their Friends
23
Minor, Minor Stitch's Great Adventure
22
Find It! Invite "That" to the End of the World
21
Counterattack! Zuruko's Secrets Are Revealed!
20
The Most Beautiful Cheater on Earth Appears!
19
Stitch Obtained the Power of Number One in Space!?
18
Even the Villains Want to Love! / Goodbye, Pleakley
17
Is It a Lie! Papa Has Become a Cool Guy!
16
Detective Stitch, The Search for the Masterpiece!
15
Stitch Does It Dangerously! Love's Strongest Rival
14
Love Angel! Happy Valentine's Day
13
Stitch Was Robbed of Memories
12
Infiltrating Yuuna's Dreams!
11
School Work Inspection, Papa and a Storm Appears!
10
Stitch Transforms Into a Natural Food-Eater
9
Stitch's Christmas Present
8
The Small Lie That Expanded Too Much
7
Rivals Stuck Together!
6
Alien Power in Princess!
5
A Ghost Ship!
4
Stylish Transfer Student, Sae-chan
3
Halloween is Stitch vs. the Vampire
2
Cute... But Stinky! Stenchy
1
The #1 Annoying Character in the Universe appears