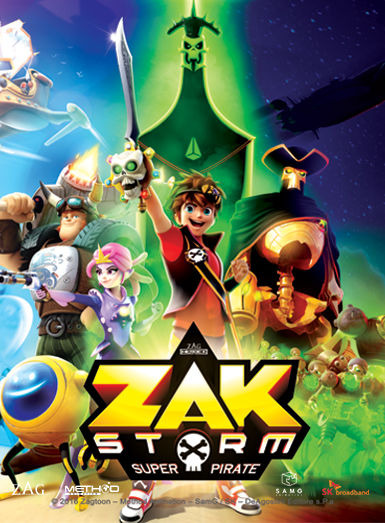 During a surfing competition, teenager Zak Storm is suddenly sucked by a giant wave amd ends up in the Bermuda Triangle. Zak suddenly finds himself as the captain of a ship called The Chaos, and, along with a band of misfits (among them, an Atlantean princess, an alien, and a ghost boy) and his talking sword Calabrass, he travels across the Seven Seas of the Triangle, to find a way home.

39
The Last Guardian
33
Tanah Lost
32
Island of the Lost children
31
Calabrass' Body
30
Wrath of Blix
29
Burn Out
38
The Lost Orb
28
The Wiseman
37
Zak's Choice
27
Call to Adventure
36
The Stowaway
35
Viking Connexion
26
Calabrass's Old Friend
34
Between Stars
25
Trial by Fire
24
Thermal Shock
23
Escape from Netherwhere
22
Eye of the cyclone
21
Crogar the Terrible
20
Lighthouse of the Soul
19
The Labyrinth of Minotaur
18
The Last Flight of Icarus
17
The Bermuda Apocalypse
16
Prison Break
15
The Shipwrecked in the Sand
14
Forged in Fire
13
Mutiny on the Demoniac
12
Lemuria Attacks
11
A Jellyfish of Legend
10
The Swap
9
Spirited Away
8
The Seas Seven
7
Troll Diving
6
The Voice of Chaos
5
Freezing Point
4
Witch Overboard
3
Morlock the Unstoppable
2
Origines, Part 2
1
Origines, Part 1