The Adventures of Twizzle 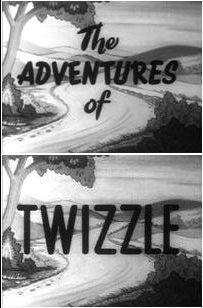 The Adventures of Twizzle was the first television show produced by Gerry Anderson. It aired on the ITV network from 1957-1959.

Twizzle has the ability to extend (or "twizzle") his legs and arms; he wears a pixie-like hat and has a cat companion known as Footso.
The series follows Twizzle's adventures as he uses his abilities to get out of trouble.