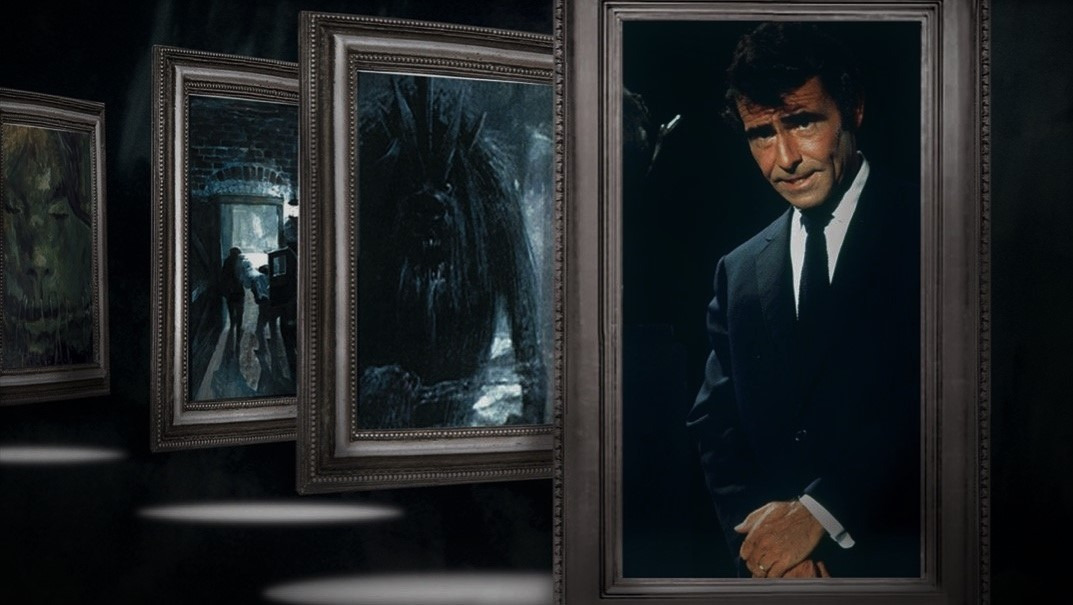 Rod Serling returns to anthology television as the host of Night Gallery, a three-season show where each story revolves around a mysterious and ominous painting hanging in an empty gallery. Mr. Serling provides the opening and closing narration to these stories, typically tales of horror and the supernatural. During the first season, the hour-long series features several shorter stories, some of which are comedic blackout sketches. The show was subsequently cut down to a half-hour, and in syndication was mixed with episodes of the TV series The Sixth Sense.

17
How to Cure the Common Vampire
16
Hatred unto Death
15
The Doll of Death
14
Whisper
13
Death on a Barge
12
Something in the Woodwork
11
The Ring with the Red Velvet Ropes
10
She'll Be Company for You
9
Finnegan's Flight
8
Fright Night
7
The Other Way Out
6
Smile, Please
5
You Can Come Up Now, Mrs. Millikan
4
Spectre in Tap-Shoes
3
Rare Objects
2
The Girl with the Hungry Eyes
1
The Return of the Sorcerer

63
Die Now, Pay Later
64
Room for One Less
62
Satisfaction Guaranteed
61
Little Girl Lost
60
The Caterpillar
59
You Can't Get Help Like That Anymore
58
The Sins of the Fathers
57
There Aren't Any More MacBanes
56
I'll Never Leave You - Ever
55
Dead Weight
54
Stop Killing Me
53
Deliveries in the Rear
52
Last Rites for a Dead Druid
51
The Waiting Room
50
The Ghost of Sorworth Place
49
The Miracle at Camafeo
48
A Feast of Blood
47
The Late Mr. Peddington
46
Lindemann's Catch
45
The Funeral/The Tune in Dan's Cafe/Green Fingers
44
The Funeral
43
Green Fingers
42
Logoda's Heads
41
Tell David...
40
The Different Ones
39
The Painted Mirror
38
The Messiah on Mott Street
37
Quoth the Raven
36
Camera Obscura
35
Cool Air
34
An Act of Chivalry
33
The Dear Departed
32
Pickman's Model
31
Keep in Touch - We'll Think of Something
30
The Dark Boy
29
Hell's Bells
28
Dr. Stringfellow's Rejuvenator
27
A Midnight Visit to the Neighborhood Blood Bank
26
House - with Ghost
25
Professor Peabody's Last Lecture
24
Big Surprise
23
A Matter of Semantics
22
The Diary
21
Brenda
20
Midnight Never Ends
19
The Devil Is Not Mocked
18
A Question of Fear
17
Silent Snow, Secret Snow
16
The Phantom Farmhouse
15
The Academy
14
Marmalade Wine
13
Junior
12
A Fear of Spiders
11
The Flip-Side of Satan
10
With Apologies to Mr. Hyde
9
Since Aunt Ada Came to Stay
8
Witches' Feast
7
The Class of '99
6
The Merciful
5
A Death in the Family
4
Phantom of What Opera?
3
The Hand of Borgus Weems
2
Miss Lovecraft Sent Me
1
The Boy Who Predicted Earthquakes